Hillary Clinton Engraved Paperweights – She may very well be the worst candidate ever.  Her and Donald Trump are jockeying back and forth for the title.  Get your Worst Candidate Ever 2016 Paper Weight today featuring Hillary Clinton.  Bernie Sanders should be the nominee, as he is a much better candidate, but Hillary is all about money and who knows what she has paid to get to where she is today.

Democrats need a candidate capable of winning and must not assume that voters will rely solely upon name recognition as they drive to the polls on November 8, 2016.  CNN reports 55 percent of registered voters have an negative view of the former Secretary of State, Hillary Rodham Clinton. In terms of building trust or increasing Clinton’s favorability rating among Americans, this will be difficult since only 1 percent of registered voters have “never heard of” Hillary Clinton and her emails are the subject of an ongoing controversy.

Bernie Sanders for decades has had the value system that Democrats aimed to uphold when polls weren’t always geared towards progressives.

Our Hillary Clinton Worse Candidate Ever Paper Weight Keepsake is an ideal birthday gift for any Bernie supporter.

Shipping and Handling for the Hillary Clinton Engraved Paperweight

Prices for the Hillary Clinton Worst Candidate Ever Engraved Paperweight are the same as all products from Prime Time Print and is based on order costs and shipping destination.  If this order is to be expedited or if you are outside of the US.  Call for a quote: 231.736.4317

Prime Time Print is a pad printing company in Lansing Michigan and Bear Lake, MI. Our company specializes in bulk printing of promotional products for businesses, organizations with special events, and home products for customized products for events such as weddings, graduations, and school fundraisers and parties. We have specialty items such as City, State, catch-phrases, standard holiday glasses, which are cheaper than personalizing the items since the template costs are removed. This gives you the lowest price on this common items that we have in stock. This has also made it possible for us to have a widely successful affiliate program, encouraging those who are looking to make good money selling our items to join our crew. With our business packages, our affiliates make $400 a package sold!
View all posts by primetimeprint → 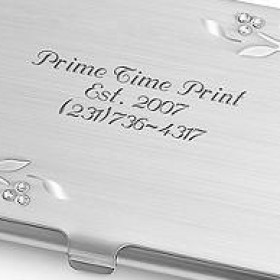 Subscribe to Us for monthly specials and discount codes

Subscribe to Us for monthly specials and discount codes. We have special offers each month as well as checkout codes only available to friends of the business. To get these codes, subscribe and check your email once a month for the upcoming specials and offers for Prime Time Print.

My Tweets
Prime Time Print Hillary Clinton Engraved Paperweights
Prime Time Print is your company for customized prints of a wide range of products for personal or business needs. We offer distributor pricing for the services that keep you competitive in the business world or to light up the day of loved ones on special occasions such as weddings, birthdays and anniversaries. We offer personalized products in multi-item packaged deals as well as individual items. Our services are designed mid-to-large businesses, groups/organizations, fund-raisers, and special occasions. Special Holiday items!! Christmas specials We also cater to families with products for birthdays, weddings, graduations, and school functions with quantities as low as 24 items and up. We keep our prices low and our selection high, as well as offering selling oportunities with our pre-made products and business packages. Personalized Shot Glasses Imprinting Prices Shot Glasses and Shot Glass Imprinting is our Specialty…… it is our only business and we give it all our attention. We craft Beautifully Imprinted Shot Glasses at prices that are unusually low for such high quality Custom Products. All our Imprinting is done using the Kiln Fired Decal Application Process, which is the best imprinting process you can use for Glassware.